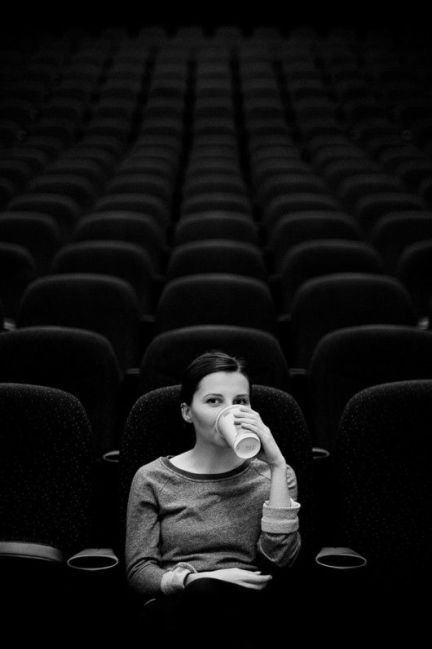 Every now and then, I put on my hat and go to a small cinema where they screen mostly European films. Each time I notice without fail at least half a dozen women scattered among the audience, seated on chairs like islands, with two or more empty seats around them which never fill up.

I like to take a seat in the second before last row, from where I can see a wave of heads receding toward the screen, which seems to float in the dark, ethereal and full of possibilities. Since they are always with their back to me, I cannot see their expression when the lovers kiss on screen or when a nude scene hushes the audience.

Some of these women who come to the cinema alone may be critics, I think to myself. Some widows. Some recently divorced. Some in long-distance relationships. Some decidedly single.

I always mean to ask one of them why she came there alone, should a chance meeting before the exist ever occur, when the question, precluded by that social smile that is usually exchanged when two strangers find themselves before a doorway that is too narrow for both of them to pass through at once and one has to slow down to let the other go first.

But somehow they all get lost in the crowd that drains into the courtyard and from there into the streets and avenues nearby, before evaporating into fresh air.

So I am left with the question — why do some women go to the cinema alone? Since most of them are pretty, and the rest interesting, it seems to me a tragedy that they don’t share their company with anyone. At least why not bring a girlfriend or two?

But then, as I go on my way, I pause and ask myself — why do I go there alone? I could call a friend. I could bring my cousin. People sometimes turn you down when you invite them to tea, but they usually accept an invitation to a film, especially if the ticket is cheap.

There’s something about the cinema experience that, despite the fact that it happens before a crowd of strangers, despite the sweet shamelessness of the actors, despite the old woman who can’t stop coughing or the man who laughs throughout the film at all the wrong moments, creates a certain sense of intimacy between you, the spectator, and the troubles and efforts of the people on the screen. And then there’s also the suspension of disbelief which the presence of another on the seat next to you, however agreeable, tends to lessen.

Maybe that’s why some women go to the cinema alone.

Or maybe it’s just because the cinema is one of those places where a woman can still enjoy an hour and a half or two of pleasant diversion, disconnecting from her thoughts and emotions, without being bothered by anyone, not even by curious glances or impolite questions, a place where she can see what she wants to see, and then fade into the crowd just at the right moment.

Do you ever go to the cinema alone?

44 thoughts on “Why Do Some Women Go to the Cinema Alone?”